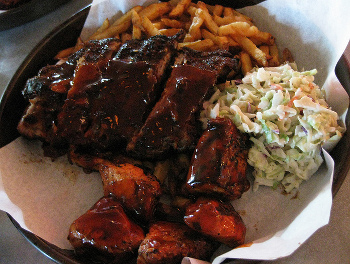 “Cole slaw?” asks the counter boy at Jasper’s BBQ. “Hey, mister! C’mon.” I give the harried teenager a foggy look, standing stupidly between a line of hungry Mississippians and their ribs.

Over there, at the farthest bench. Sure looks like Marcie, but she wouldn’t be in Tupelo. I know all my exes live in Texas, like that song. I’m in this shit-hole mostly ‘cause here is where they ain’t.

“Yeah, cole slaw. Thankie,” I mumble. The kid slaps a large helping on the wax paper next to the mess of ribs, hands me the plastic basket, moving on to someone else before I can ask for more sauce.

I pay and grab a fistful of napkins, trying to get a look at her face. Classic Hank Williams crooning: Heeeeey, good lookin’! Whaaaahhhhh-cha got cookin’? . . . She’s got Marcie’s blonde Texas-halo of hair, and Texas-sized curves filling skin-tight jeans and a bulging red blouse. Red – my new favorite color. Oo-wee! Marcie or no, I gotta get me a closer look.

She’s talking with some girlfriend who’s wearing a top just as tight, just as sexy. I see room on the bench right in front of the two hottest girls in the joint. Out of habit I review my excuse about the last five alimony payments. I drop my ribs and sweet tea to the table in time to the honky-tonk, and swing my legs over the bench just as Hank brings it home. Then I look up at my quarry.

The jukebox mocks me by going all Christian: Dropkick me Jesus, through the goal-posts of life . . . Shit. In a flash I’m on my feet.

“What’s the rush, sugar?” says a familiar voice. I squint at Marcie’s friend.

I blink at my first wife. “Your hair, Evie. I didn’t recognize you.”

“Didn’t recognize Evie,” says Marcie. “What about me, Chuck?”

“But we hate you more, Chuck,” says Marcie, always the hard-ass.

“Oh, yeah. Some sort of fun trackin’ you down, Chuckie.”

“Guess that makes me Brad Pitt?” I half smile and grimace.

“You girls got guns?” I slowly pick up my basket of ribs.

“Nah, sugar,” purrs Evie. “We ain’t gonna hurt you.” I shoulda stuck with Evie. Way sexier as a brunette, too.

Marcie points back over her shoulder. “That’s what Pete’s gonna do.” Evie turns around and waves toward a mountain of a man holding a bat and wearing a scowl. I drop my ribs and run.

“Fear to do ill, and you need fear naught else.” - Benjamin Franklin

"A man who wants the truth becomes a scientist; a man who wants to give free play to his subjectivity may become a writer; but what should a man do who wants something in between?" - Robert Musil, from The Man without Qualities

"Contradictions are what make writers interesting; consistency is for cooking." - from "Serious Noticing" by James Wood