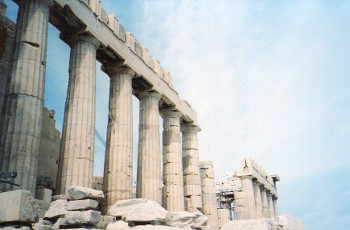 The panoply of gods, the gods of the Greeks and Romans, the Aztecs and Incans, the Hittites and Summarians – those gods that they worshiped and feared, in ways that we may find quaint and primitive and obsolete . . . Do not mock them! For they are alive and well. They have crossed the oceans, they are living among us now, and they are as powerful and as pissed as ever. Not only Triton, Atlas, Enlil, and Quetzalcoatl, but their children, and their great- great- great- grandchildren. Local gods, American gods, Coloradan gods who control very specific parts of our lives. These lesser gods, these quotidian gods, you already know them well, and they will be obeyed.

The god of traffic lights – she is a vengeful god. One day she will smile upon you with her green countenance all up and down 28th; but on another, when we are already late to the dentist, she will spite us with no turn arrow for the entire cycle – the entire cycle! – making us gnash our teeth and yell at our dog.

There’s the god of the convenient parking space – she is even more fickle, and gets a kickback from the gods of wind and snow and bad hair – I’m sure of it!

The god of silicone knoweth me well, and taketh away from me mine files, when I hath transgressed by not saving as frequently as I knowth I shouldeth. My poor wife is bedeviled every day by the demigods iPad and WiFi, and their hatred of any programs broadcast on the CBS. Oh, how she doth curseth and wail.

The god of rain – and by that I mean the Greek one, Zeus – is alive and well and having a grand old time here in Colorado. Re-crafting the Front Range into a soggy imitation of the Cascades, or the Amazon. Oh, we know Zeus all too well, don’t we, Boulder?

There are, of course, the gods of football, of baseball, of basketball, of hockey, invoked every day on the Sports Radio, and, on two Wednesdays every month, the gods of bowling, gutters, and splits. They all hate me, especially that evil imp, Belichick.

When baking a souffle I appeal to the French god, Escoffier. Even his name seems to mock me and my feeble attempts to make a proper offering.

And finally, one of the most important gods, and one who is in this room at this very moment. I’m talking about the god of beer, Brettanomyces. We are in his temple now. His bearded and be-tatted acolytes are all about us, scurrying to and fro at his bidding, adding the hops, stirring the wort, cleaning the tanks. We consult the oracles of the GABF, who have bestowed their goodness upon the Brown Ales of Colorado, and of this very establishment. We sing the praises of the IBU, the ABV, and the malt-forward tongue feel. And the gods smile down upon us every time we raise a glass. So why don’t we?

Do I have an Amen? Amen.